Is MLM A Pryamid Scheme?

Is MLM a Pyramid

Ever since Amway started in 1959, the world has targeted them and all other mlm’s as pyramids.

Let’s have a deep dive into this subject. I believe the MLM has gotten a bad rap due to some bad apples and a ton of misinformation!

WHAT IS A PYRAMID?

Beyond the geometrical definition, a pyramid is a business structure wherein one person is at the top and each level below people are added into smaller pyramids. The premise is that each person keeps recruiting others and they keep recruiting and so on and so on.

The term Multi-Level Marketing is derived from this structure where people are positioned below other people. The term pyramid only really refers to the shape of the structure.

WHAT MAKES IT ILLEGAL?

The simple explanation of an illegal pyramid is a business structure whereby people ONLY get paid for recruiting others and you can NEVER make more money than the person who recruited you.

That is the basic test of is it legal or not.

The Amway Corporation went through a rigorous lawsuit in 1979 by the FTC regarding accusations of operating an illegal pyramid scheme. Amway won the battle and here’s why:

Another red flag is if you have to pay a “sign on” fee to join a company. This sign up fee should be no more than $100. Amway has none to be a distributor. Prepaid Legal (now known as Legal Shield) had some problems as the were asking for $495. This money was paid to upline people (your sponsor and people above him) as a “training” bonus. However, very little training was done and, in reality, it was a recruiting fee. That’s what stung Pre-Paid Legal.

Technically, yes! Think about it for a moment. In the picture below, you will see the layers (or levels) of a corporation. What does it look like? A pyramid! 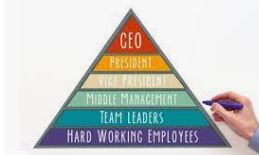 Now, I do not remember from my corporate days and employee at the bottom EVER making more than the CEO. Nor do I believe it would ever happen.

It’s interesting that the same people who put down multi-level marketing companies work for a pyramid!

CAN I REALLY MAKE MORE MONEY THAN THE TOP GUY?

Yes, I believe you can. First off, many people come into and out of MLMs. There is usually no one person sitting at the top of everybody involved. The company itself adds/sponsors/recruits people into the company and then builds another team from there. They do this because a true pyramid structure would collapse under any compensation plan.

I’ve been involved in several MLM’s over the years. The first was Amway of course and then several after that.

I joined a company called Eniva and I set out to prove once and for all that I could make more money than the person who sponsored me.

I recruited personally and helped other on my team over 500 people in one year. I also retailed many bottles of the VIBE, that I still use to this day!

And guess what? I made more money each month than the person who sponsored me. I also stopped recruiting and selling after that year and I still got a referral check for 6 years after based on the sales and recruiting of the people that I brought in.

In order to really prove this to yourself, you should study the compensation plans of any company that you are considering. The basic concept is that a company cannot, and does not pay to infinity. This alone proves that you can only make so much from this structure and people below you can make more.

Misinformation is everywhere. It is part of free speech. I can say almost anything I want until I make a false claim or I damage someone.

The MLM industry, still to this day, continues to have people say it is a pyramid scheme. I guess companies like Amway, Mary Kay, and the like just don’t have the time nor energy to sue people.

Pyramid scheme Lularoe has been the most recent to come under scrutiny. Their big problem was the massive inventory required. Other than that, it seemed to be ok. I have to do some more investigation into it.

Take the time to sift and sort through the information and you will find that 99% of the companies are legitimate. It’s always the bad apples that spoil the bunch!

One Response to Is MLM A Pryamid Scheme?